Now, as you may have guessed by the design of the banner for this weekly feature, I LOVE the Streets of Rage series, with II being one of my all-time favourite games, and frankly I’m pretty sure the hype for SoR4’s then-upcoming release is what sparked this idea. So for the next five Sundays let’s take a look at all four official games (and one unofficial game) in the series. The original Streets of Rage is the one that looks the most dated, the sprites being far thinner and less detailed than the ones seen later, but is it still fun to play? Let’s find out!

Streets of Rage was released for the Mega Drive in August 1991 in Japan, with the US release the following month and PAL release the month after that. Game Gear and Master System ports were created and released at the end of 1992 for the former, and in January 93 for the latter.

Since then it has appeared in multiple collections, like one for the Mega CD I had, as well as Mega Drive collections for 7th and 8th Generation consoles and a Wii Virtual Console release.

The original Streets of Rage always feels like it’s the halfway mark between Golden Axe and the glorious Streets of Rage II. It has far more varied and satisfying combat than Axe, with full and fast combos, jumping strikes, grappling strikes, grappling throws, the lot, but it all feels far smoother, quicker and a lot more satisfying. There aren’t any health-draining special moves though, instead you get screen clearing attacks much like the magic in Golden Axe, though in this case it’s a police car rolling in and firing a large explosive weapon, and it’s fun, but not as strategic as the later model, plus it breaks up the flow of the action as everything on screen freezes. So like I said, it feels like what it is, Sega are moving away from Golden Axe, but haven’t yet hit the sweet spot (not that just one company called Sega made both games or anything, but you know what I mean!)

You of course get to pick up weapons, like knives, a pipe, glass bottles and what always looked like a pepper shaker (mostly due to the enemies stun animation looking like they were sneezing) but it was probably meant to be a smoke bomb… the latter two weapons aren’t anywhere to be found in the next two games, for the record. You can of course also regenerate health via “floor turkey” and sometimes get extra lives or a second screen-clearer from smashing objects as well.

Returning to looking at classic scrolling beat ‘em up clichés after a long run of fantasy and sci-fi based games, the original SoR scores quite highly. We have whip-wielding ladies (that annoyingly screech and refuse to get up if you hit them sometimes, a feature that thankfully is removed in the sequel), a boss that’s a fire-breathing fat guy (or guys on multiplayer) and one that’s a wrestler, and of course a lift stage. It also has some very odd, unique enemies like evil jugglers that juggle and toss lit torches and axes at you, or a gigantic boomerang wielding boss. Actually apart from the final boss, all the boss are weirdly disproportioned compared to you, which is something that was dropped in subsequent games….

Brings a tear to your eye… and fire to your face!

As mentioned the graphics are poorer compared to its two sequels (well, three, but since SoR4 came out in 2020 that would be a bit of stupid comparison!) but they still get the job done enough that you don’t really mind, thanks to the fun gameplay.

Sound is obviously terrific, as it is for all games in the series. Yuzo Koshiro’s music is immediately catchy and memorable, and while I obviously think the next game’s soundtrack is his peak, there is nothing wrong with this, the boss fight music is especially memorable. I also have to say that the soundeffects are good too, which is always nice when the main objective is to hit people…

I don’t care how good the pay is, giant hydrolytic presses hammering the floor in between work stations is a bit too dangerous for my liking…

A crime syndicate ran by businessman Mr. X has taken over the city, and even parts of the police force. Disgusted, Axel Stone, Adam Hunter and Blaze Fielding leave the force and decide to take matters into their own hands and take out Mr. X’s syndicate one by one, by themselves. Thanks to Mr. X having the only gun in his entire syndicate, it goes well, and Mr. X is taken down… For now. 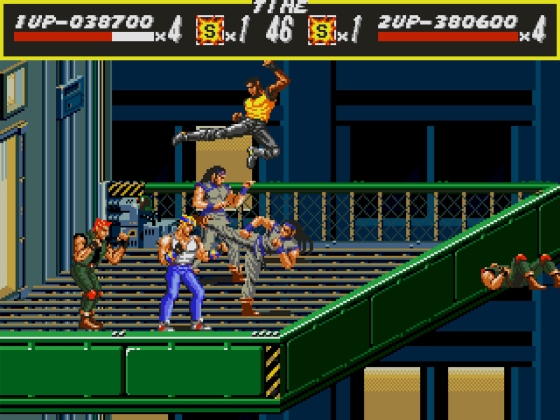 Wow, so many things happening in this screenshot. I’ll just let it speak for itself…

I loved Streets of Rage, played it plenty with friends and relatives all the time. I will admit that once SoR II came around I basically never returned to this until it was far enough in the future that it was nostalgic, and even then if I or my friends were nostalgic for SoR we’d more than likely put II on, so… Yeah. Still, “Then” as in when it was released? Loved it.

Axel falls to the floor hurt, only to be brought back round by the loving sight of floor meat.

Now? It’s still really fun to play, and a great soundtrack helps a lot too. Obviously it looks more dated than the chunkier and more detailed sprites of its sequels, which still look great today, and the combat isn’t quite as smooth, but that doesn’t hurt it too much. Still a fun game to throw on.