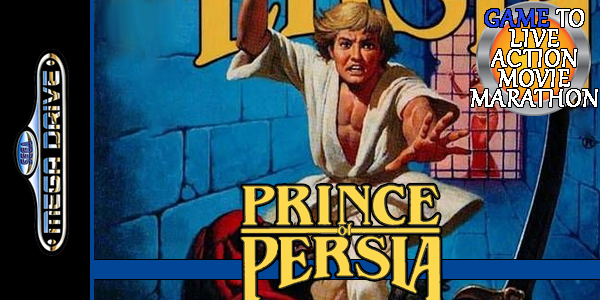 Yes, I know, I should’ve reviewed Prince of Persia: The Sands of Time alongside the film Prince of Persia: The Sands of Time, but although the time mechanics looked fun, I never brought it or even played it. So rather than not review anything at all I thought I’d review the one Prince of Persia game I played, that being the original! Well, the Mega Drive port of the original, anyway. I rented out a couple of times, not because I was good at it, but because the fluid movement and realistic swordplay was cool as hell. Let’s take a look!

The original Prince of Persia was released first on Apple II computers in October 1989 in the US, with the Japanese and PAL release coming the following year. In the following four years it saw ports to other PC-based systems like the Amiga, MS-DOS and the Amstrad, but also to consoles like the Master System, NES, Game Boy, SNES, Mega CD and of course, the Mega Drive, which I’m reviewing here.

It innovated a lot of what we take for granted now, specifically using rotoscoping to create realistic movement for platforming. 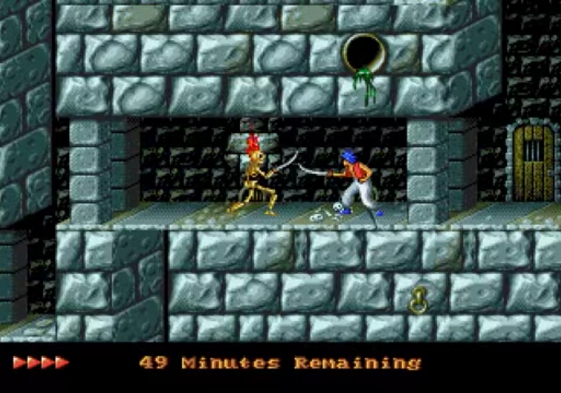 Sword duel with a skeleton, just like the Persian empire of old!

Gameplay can be broken down into two parts: platforming and sword fighting. The former is simple to talk about: you jump from edges and grab onto ledges, all while avoiding pitfalls and spike traps, or running through doors that could have a hidden guillotine above it. The sword fighting is a bit more complex: you automatically draw your sword when near a sword wielding enemy, and you can edge forward, jump back, parry an in-coming strike or lash out yourself, as well as potentially hit a special parry-and-strike if you’re lucky. You can also edge enemies to a pit and knock them off if you’re even more lucky. You have a health bar that can take a few hits, though some traps or longer falls are instant death.

Both the platforming and fighting can be tricky to get down, due to the early movement capture you have to be in exactly the right place to jump or grab things, which when you’re running across a level because you’ve activated a time-based door that will close in a few seconds, can be rather… stressful. The sword fighting is similarly annoyingly accurate, though eventually you’ll get the hang of it at least (except for some of the bosses…) That being said, throughout the whole time you’ve got a literal clock ticking before the Princess is killed and you lose, meaning you can’t exactly take your time.

Overall it was a great game to look at and play about with back in the day, but I have a feeling the MD port either made things more challenging on purpose, or as a result of the porting process…

The Prince gets drunk off his arse before having to carefully time a jump between teeth-like blades. Makes sense.

The graphics are nice. Not amazing, but good for the Mega Drive. Certainly looking at the sprite work it is a step up from the original Apple II version. Most importantly though, the animation still looks nice and smooth.

Soundtrack is… how to put this… generically Arabian? But on a Mega Drive Chiptune set, so… yeah. It’s fine, I guess. Soundeffects and grunts are fine.

The Prince… *sigh*, runs towards a door. Not sure why I kept this screenshot, to be honest…

The Sultan’s vizier Jaffar, an evil wizard, has taken over the country and now has plans to execute the Sultan’s daughter to establish his reign. You’ve been thrown in a rather long and deadly dungeon and must fight through traps and guards before killing Jaffar himself and saving the Princess… Which you do, if you somehow manage to complete it. There is also a side-plot revolving around a mirror that creates an evil duplicate of yourself, but… Meh.

Look at that ledge grabbing animation!

“Frustratingly difficult, but still so fun…” is about the best way to describe me “giving it another go” back in the day. Really though, looking back… It wasn’t that fun, purely due to my own lack of patience!

Wooo! Made it… sort of a long way in… Okay, 20 minutes in. Still further than I ever had before…

Now? It’s quite fun still… I certainly got a lot further, and maybe even started to get a hang of the combat! … In the end though, it’s still really difficult and frankly the precision of the jumping mechanics and the general twitchy-ness of the controls does make for a more annoying time than a fun time, if I’m honest…