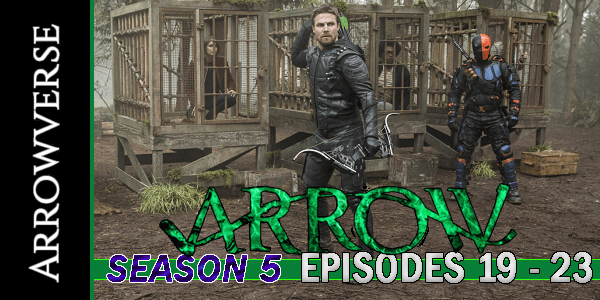 Arrow’s fifth season reaches its big finale, and what a finale it was. In fact this last chunk of episodes felt far more like a overall series finale than a season finale… well, accept that end-of-season cliffhanger… Anyway, let’s take a look!

With Prometheus on the run, Team Arrow is frantically trying to find his whereabouts before he starts killing again. Then again, with Felicity still working for the underground hacker group Helix and John having marital troubles, the team might implode without his involvement.

Oliver Queen / Green Arrow (Stephen Amell) – Moonlighting as both the mayor of Star City and the vigilante Green Arrow, Oliver Queen’s life has been turned even more upside down by Adrian Chase, who is determined to make Oliver realise that he hurts all those around him. Oliver’s first instinct was to agree with him (of course!) but he is back to relying on his friends to fight the menace…

Felicity Smoak / Overwatch (Emily Rickards) – Felicity is desperate to help Oliver and her friends so is using a top-class hacker network known as Helix to help their efforts. Despite all she’s been through, she still retains her nerdy sarcastic-ness, which is nice…

John Diggle / Spartan (David Ramsey) – Former soldier turned bodyguard turned masked vigilante, John’s wife Lyla is currently the head of ARGUS and that has lead to some unpleasant truths getting out that is threatening their relationship…

Thea Queen (Willa Holland) – Oliver’s sister who starts off away on a trip, but returns just in time to be caught up in a crazy series of events that nearly costs her and her friends their lives… so… back on holiday you go after this!

Quentin Lance (Paul Blackthorne) – After managing to stabilize a drinking problem that came from losing his second daughter to weird vigilante-related instances (though this time she wasn’t brought back…) Quentin has been concentrating on his job as deputy mayor, as well as helping young vigilante Rene Ramirez with his daughter…

Curtis Holt / Mister Terrific (Echo Kellum) – After Felicity became more of a central cast member, Curtis took up the mantel of nearly-useless nerdy comedy character, and pulls it off well! He’s also a vigilante named Mister Terrific, using his “T-Spheres” to do damage from afar.

Rene Ramirez / Wild Dog (Rick Gonzalez) – Hockey-masked vigilante brought into Team Arrow who has since began to let his guard down… that is, unless he has to gun down a bunch of people, which is okay in Team Arrow’s book, apparently…

Dinah Drake / Black Canary (Julia Harkavy) – A woman who coincidentally gained the same vocal wave projection powers that Laural Lance had via a device, and so was brought on board as the new Black Canary. Hasn’t done a lot since then, but hey-ho… early days.

Adrian Chase / Prometheus (Josh Segarra) – Psychopath who has become obsessed with Oliver Queen after he killed his father long ago. Now wishes to see Oilver own up to the fact that he harms everyone around him and that he actually likes killing. Ideally Chase wants Oliver to kill him as the final proof that he’s right, which… yep, that’s insane alright!

Konstantin Kovar (Dolph Lundgren) – Evil Russian (obviously, given who plays him!) who followed Oliver to Lian Yu in the days just before he left to return home five or so years ago. 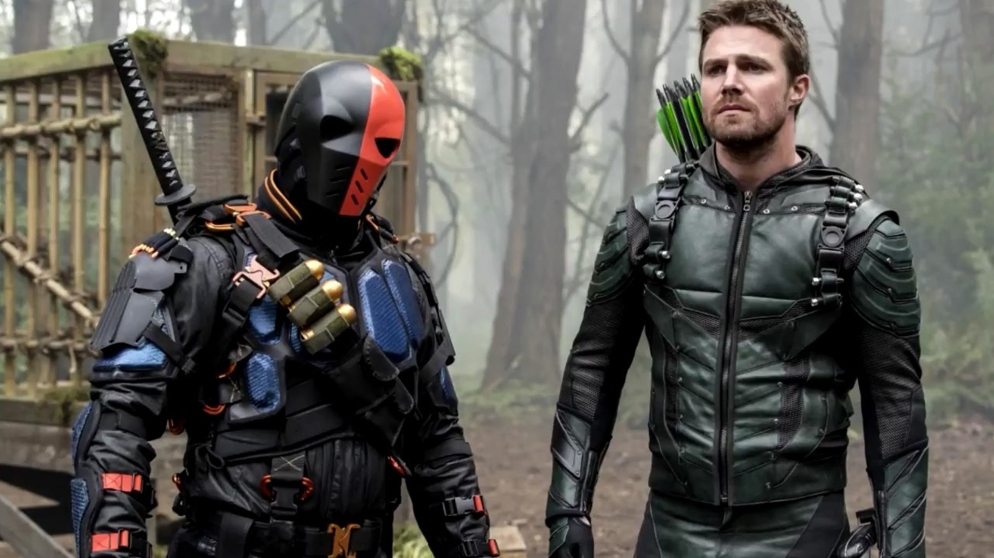 “You realize I killed your mother?” … that was an actual line from when Oliver recruits Deathstroke. Logical thing to check before teaming up with someone though!

The final episode would have made a great overall season finale. All of Oliver’s friends and allies are captured by Chase and put on Lian Yu, the island he spend so long on, and so as a result Oliver creates a team of his past foes, Malcolm Merlyn and even Slade Wilson, along with Nyssa al Ghul. This leads to a big show down between Prometheus / Chase and his ally in Talia al Ghul and what’s left of the League of Assassins, and Oliver and his crew (which slowly includes his friends as their freed) It was great seeing Slade Wilson again, especially since he is back to being sane again. The final face-off between Oliver and Chase, who has Oliver’s son as a hostage, on a boat away from the island was great, and the big cliffhanger of Chase committing suicide and thus causing dozens of bombs to go off all over Lian Yu that he had linked to his life signs was great. Now, it’s obvious the entire supporting cast hasn’t been wiped out at once, but it will be interesting to see if anyone does get bumped off.

Also during the episode Malcolm seemingly sacrifices himself for Thea, taking her place on a landmine, though it happens off-screen, so I doubt he’s dead either. The flashbacks during these last few episodes, finishing off Oliver against the Russian mob, leads directly into the start of the Season 1, which Oliver being picked up, and even features the first phone call he makes to his mother. That’s another reason why this felt like the overall series finale, like it had come full circle.

Episode 21, leading into this mess, featured Cody Rhodes as Derek Sampson again, which was fun, and was generally a good Arrow-by-numbers episode, complete with the team infiltrating a warehouse at night and having a good old punch up.

The sub-plot of Quentin trying to reunite Rene with his daughter was a touching storyline, given all Quentin has been through with his daughters and Rene finally seeming more human. I look forward to seeing this expanded upon in the next season (presumably).

Episode 20, “Underneath”, was a well-written episode, but if focused on Oliver and Felicity “will they get back together” storyline, from two different points in time no less, and I just don’t care. It’s the same thing that happened with Ross and Rachel in Friends or any other number of relationships in long running shows, you can’t do the pay off and then undo it and expect the same level of interest in doing it all over again. Either do it and commit to it, or do something that stops it until the final season and end the show by finally doing it. Otherwise, the trapped underground while running out of air, although cliché, was good.

The episode prior saw John and his wife have a falling out because he found out that ARGUS have blacksites where people are being held without due process and the like. I’m sorry, but given all John’s been through, and hell all he’s done with Oliver including holding people without due process, his reaction was just nonsense. I don’t believe for a second that he didn’t know ARGUS was doing stuff like that, or that he wife was in charge of it. I mean, come on! Shadowy government-backed operation with high-end technology, of course they’re a bit shady! Thankfully it didn’t last long…

I have to say bringing the Russian mob storyline onto the Island and having it lead straight to the series opening was a bit of a stretch… and more than a little unnecessary, especially since he was injured in the fight, and I know it’s been five years, but I don’t think he has fresh wounds on him in the opening episode…

“So you’re an evil version of my dead daughter from a parallel Earth? … okay, just checking.”

A very strong final two episodes and some good lead-in storylines bring this season to a close in spectacular fashion. While the big cliffhanger was probably too big for me to buy into it, I do wonder who will and won’t survive. Top stuff!