The Fourth Season of Legends of Tomorrow had some genuinely funny and dramatic bits, and benefitted greatly from the inclusion of John Constantine, but it did suffer from some clunker episodes and Gary the funny nerd character became far too over-exposed by the end. More good than bad overall? Well, read on and find out!

After killing the demon Mallus, the Legends were ready to relax until John Constantine informed them that, in solving one problem, they created a much larger one. When the Legends let time crumble to release and defeat Mallus, the barrier between worlds softened. History is now infected with “Fugitives” – magical creatures from myths and fairy tales. Having been expelled throughout time by people like Constantine, they are now returning to the real world in droves and making a mess of things. 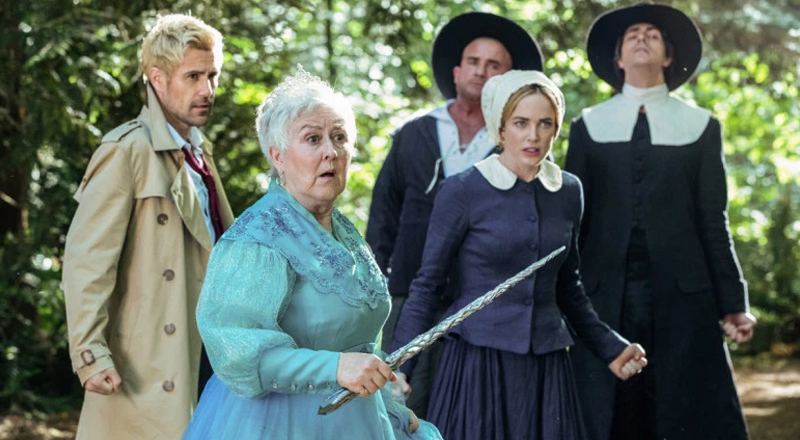 A small selection of the principle cast, anyway…

Sara Lance / White Canary (Caity Lotz) – Sara is ready to spend a relaxing evening with Ava, celebrating the end of the time anachronisms, but a visit from John Constantine soon tells her it’s not going to be that easy…

Ray Palmer / Atom (Brandon Routh) – Ray is still thinking about his decision to let Nora Darhk go… was it love clouding his judgement, or has she really turned a new leaf?

Mick Rory / Heat Wave (Dominic Purcell) – Mick is just happy to still be on board the Waverider, giving him a chance to burn the enemies he’s pointed at, and giving him plenty of time to write his rather odd novel…

Nate Heywood / Steel (Nick Zano) – Nate has been finding it hard on board the Waverider since his break up with Amaya, but that being said, he certainly doesn’t want to go far from the team and their goals…

Zari Adrianna Tomaz (Tala Ashe) – Zari is still among the newest members of the Legends, but she has settled in, managing to keep back the want to see her dystopian future erased by meddling with time…

John Constantine (Matt Ryan) – John has had a rough time of it lately, falling in love with a man and then seeing him dragged to hell by a powerful demon… it happens! Still, to take his mind off of everything, maybe he’ll pay Sara Lance a visit…

Charlie (Maisie Richardson-Sellers) – Charlie is a shapeshifting creature from another dimension that was freed when Mallus was destroyed. She is currently hanging out in 70s London.

Nora Darhk (Madeleine Arthur) – Nora is trying to lay low as the Time Bureau is still after her, and even with the Time Stone she can’t get too reckless… though her current method of disguise leaves a lot to be desired…

Ava Sharpe (Jes Macallan) – Ava is in charge of the Time Bureau, and in love with Sara Lance, which she often finds hard to decide what to focus on. Still, when time itself is threatened, she will leap into action…

Hank Heywood (Tom Wilson) – Hank is Nate’s father and a high-ranking official in the government that oversees spending, including the money that goes towards the Time Bureau…

Mona Wu (Ramona Young) – Mona has a job delivering pizza, including to an odd Bureau at certain… times? … She eventually joins the Time Bureau, alright?

Gary Green (Adam Tsekhman) – Gary is the super nerdy office-type who works at the Time Bureau. He desperately wants to be liked and looked up to, maybe even become a member of the Legends…?

Neron (Christian Keyes / Brandon Routh) – Neron is a demon who wishes to control Hell and lead the demonic forces onto Earth to capture more souls, and to do so he’s using the body of John Constantine’s old lover… 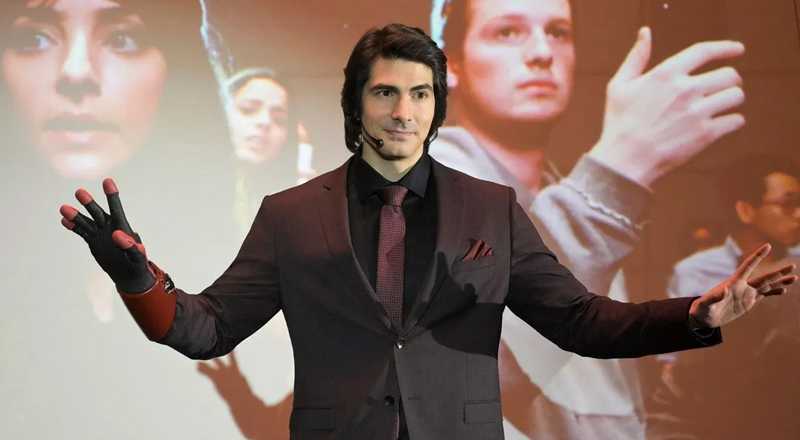 Neron: Good at being bad!

First things first, I mentioned in the previous series reviews how I was looking forward to having Constantine on the show as, naff accent aside, he’s a great character, and I was right! His sarcastic “British” wit makes a good addition to the cast and his personal problems added some drama too. Turns out he’s bisexual (as he is in the comics) and he fell in love with a man named Desmond, but sadly he was taken to hell by the demon Neron. “Comes with the job” aside, it personally shook him. During these first few episodes he eventually uses the fact he’s on a time ship to his advantage and changes history to spare his lover, but time gets completely screwed up, and try as he might to resist the effects of remembering two different timelines at the same time, he eventually sets everything back on course.

The main concept of the series was magical creatures being spread out across time, and at first they use Constantine to send them back to hell, but a new addition to the Legends soon changes their mind to imprisonment on Earth instead. The new member is a shape-shifter called Charlie who ends up stuck in the body of Amaya when John gets annoyed and locks her power away. Apart from allowing Maise Richardson-Sellers to use her native English accent she also has a completely different personality, more playful and rule-breaking. It’s certainly a refreshing change from the one-note boring Amaya, and a welcome addition to the show.

Speaking of boring and one note, Nate has been taken off the team and put in the Time Bureau instead, which means he’s less in the thick of it… though he does still feature heavily. Again, he’s not bad, per say, but he is on the generic side. His father, played by Tom “Biff” Wilson himself, is a bit more interesting in that he’s a government official who is colluding with Neron, the episode where he and Nate fend off a Minotaur by singing it a song was a good laugh. Hank dies eventually, but manages to reconnect with his son in the afterlife. 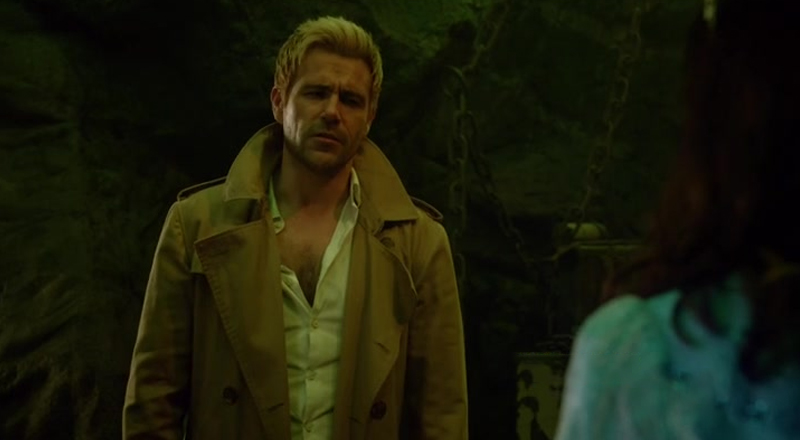 Constantine having a HELL of a bad time! (it’s funny because at this point he was literally in Hell, so… Haha.)

In the last episode it seems Nate gave his life to stop Neron, leading to him watching his friends grieve for him from above sitting next to his Dad. The two finally connect properly before Nate is revived, his father looking on proudly. It was one of those rare really well done serious storylines you get in this show from time to time. It also featured Zari changing her own dystopian future and therefore erasing her time with the Legends away from history in order to save her love Nate, which was dramatic and then immediately funny when Nate is suddenly hugging Zari’s brother Behrad thanks to time changing, everyone suddenly acting like he’d been a part of the Legends forever.

Nora Darhk being slowly “redeemed” and earning the trust of people like Eva (in the same good episode mentioned just above) was a good story, and he love affair with Ray was oddly believable. In fact the last few episodes, where Neron is possessing Ray’s body, are great because Mr. Routh plays a great villain, as it turns out, and scenes of John in Hell walking around trying to find Ray’s soul were a good laugh, eventually joined by Nora. There was a funny Easter egg where Ray is playing Jenga with Vandal Savage from Season 1 in Hell that made me laugh.

An episode featuring the creator of Godzilla being inspired by a creation he accidentally brings to life thanks to a magic book was good too. It ends with Rory bringing his three-breasted fantasy character to life, which was all sorts of funny, especially the reactions from the rest of the crew. I appreciated Episode 9 as a life-long wrestling fan, as the beast Konone is hidden in Mexico and becomes a Lucha Libre star. It ends with the creature being killed in front of her human love interest Mona, who then turns into a monster herself, which is an interesting twist and ends up with a funny scene when Sara and co. have to find her in 70s America. That episode was a good laugh as well, with a road trip, Richard Nixon kidnapped in a cupboard, and a bug that forces you to tell the truth all adding some amusing scenes. A coma/dream sequence where Sara has to save Ava from her own purgatory, which turns out to be a massive hardware shop, among other things, was a good laugh, and an episode where Neron forces Constantine to visit one of his own ancestors was good too. 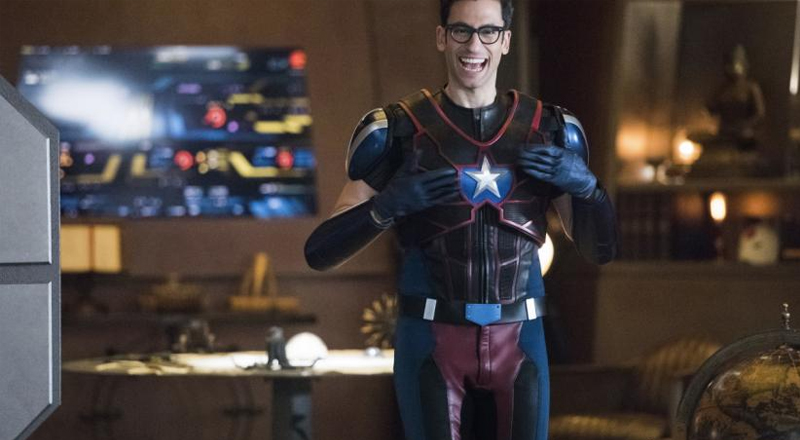 It’s funny because he’s nerdy but wants to be cool!

A lot of the humour is more on-the-nose and less funny than last season, for me. The sight of a unicorn impaling people wasn’t that funny to me, or an evil fairy Godmother wanting to get the young girl she’s guarding to get her to kill her enemies was funny to start with but went on too long. Episode 8 was the worst, where they broke the fourth wall constantly with false new show names and line ups of the Legends of Tomorrow thanks to John’s time meddling. It made the episode feel like a jokey false thing that didn’t really happen, rather the after effects of someone trying to change history. Very Futurama, but not being animated makes things not work as well…

Episode 4 was set in an American “Summer Camp” and featured Sara and Eva getting magically transformed into young teens… man that was bad. Proper cheesy American kids show stuff that holds zero interest to me (but obviously as with anything, if it struck a chord with you, then hooray!),  thankfully Constantine and Ray being camp councilors and being equally bad at it in different ways actually was funny to me, so it was a mixed episode rather than a bad one. The same goes for Episode 7, which saw the old living doll cliché get rolled out, which was dull… until it possessed the body of the Martin Stein muppet, which was unexpected and funny. The half of an episode that was focused on Mick being a trashy author and turning up to a convention but using Charlie to act as his pen name was really … not very fun, for me personally. It just, for whatever reason, didn’t land and I was just rolling my eyes whenever we cut back to it.

Gary, the nerdy Time Bureau agent, and his eventual love interest Mona, were both kind of funny and sweet to start with, but they’ve turned the funny personality quirks up to the maximum, to the point where they didn’t feel like real people any more, and that’s hard to do when the series is so relaxed and humour-based in general, so… it’s quite the achievement. Gary especially was over-exposed by the end of the series, it was one of those cases where a gag side-character got promoted without getting any new layers to his personality, and it stuck out like a sore thumb. 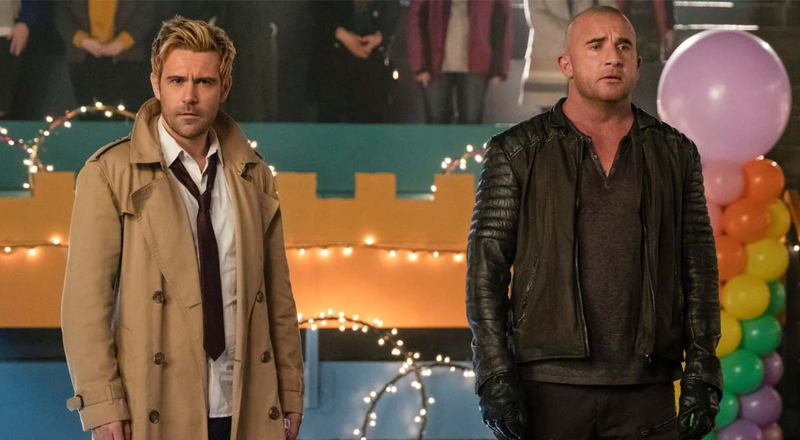 Also in this scene was a Dragon that I realise I never once mentioned in this review. Well: there was a Dragon. There you go.

Legends of Tomorrow Season 4 was much like the previous season: full of good laughs and some drama, but I feel this was weaker. The magical creatures did nothing for me, and some of the intentionally one-note side characters getting a greater focus but no new layers hurt it a bit more. Still a good laugh though!