Thanks to already having reviewed the original Resident Evil, I’ll be tackling the far superior remake up against the film of the same name, which is vastly different in every way despite being released in the same year! The Resident Evil Remake still remains one of the most legitimately tense and atmospheric games I’ve ever played, as well as one of the more challenging for newcomers… Let’s take a look! 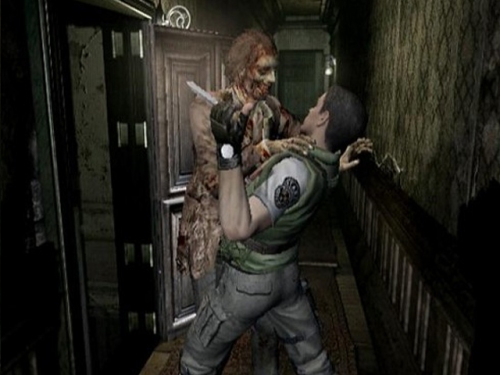 Chris and a zombie prepare to kiss in a loving embrace. I think that’s what’s happening, anyway…

The REmake, as its often short-handed to, came about when Nintendo signed a deal with CAPCOM to port old Resident Evil games to the Gamecube, as well as some exclusive new ones. Shinji Mikami, the series creator, looked at RE1 and saw that it just wasn’t good enough to port, so decided to remake it from the ground up. It was released in March 2002 in Japan, April 2002 in the US, and September 2002 in Europe. A Wii port was released in December 2008 in Japan, and June 2009 for the US and PAL territories, while a wide-screen, polished and un-tank-controlled version was released under the name “Resident Evil HD Remaster” in November 2014 in Japan, and January 2015 everywhere else for the PS3, PS4, XBOX 360, XBOX One and PC. Finally, a port to the Nintendo Switch was released in 2019 worldwide.

Sadly the game’s original release, despite being a hit with reviewers, didn’t sell very well, and that led to a more action focused Resident Evil 4… (not that it was a bad game, obviously!) 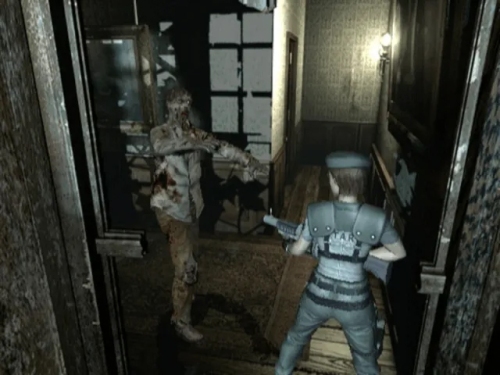 Look at that camera positioning, outside through a broken window, with the moonlight casting shadows behind the scene. Perfect.

Gameplay is similar to the original. You still control your character with “tank controls”, you point your character in a direction and then press forward to move them, the camera changing angles as you move from scene to scene. As either Chris or Jill you move around the mansion (and more!) either fighting monsters with guns and knives, or more than likely, you’ll try your best to dodge them. You have to collect items like keys and jewels to access new areas, all with limited item slots, and you can push, climb and break certain objects when needed. Going through a door to a new area is still met with the “approaching door and slowly opening it” cutscene, and saving is still done with limited ink ribbons and typewriters.

New to the REmake are “self-defence weapons” like small knives or a Taser that can get zombies off you when they try to bite, with limited use. Speaking of the undead, they’re even more… undeader than before, as when you rekill a zombie and leave them they’ll eventually turn into a “Crimson Head”, a far quicker and deadlier version of the standard zombie. The only way to stop them is to burn the zombie bodies before they re-reanimate, or destroy the head. It certainly adds another layer of strategy as to when you should take out a zombie or when you should just dodge past them.

There are also bosses, obviously. All the classic bosses are back (the giant snake Yawn, the giant plant… Plant 42, and of course the Tyrant) alongside a new boss: Lisa Trevor. She was planned for the first game but cut, which was a nice bonus for this remake. She is in a whole new area just outside the mansion, as well as an area underneath it, and she’s pretty much unkillable, even when you finish the boss off…

One of the new outside locations, just as beautifully lit as everything else.

The graphics were absolutely jaw-dropping when the game first released. It’s still 3D models over pre-rendered backgrounds, but wow, what a difference seven years can make because it looks stunning. The lighting especially was, and still is, amazing. When they re-released the game in “HD”, beyond the widescreen format and an upgrade in detail to the character models, the game didn’t need much changing, which says all that needs to be said…

The sound design to good too, with minimalist music that amps up the atmosphere, and soundeffects that add to the nervous feeling you get as you play. The voice acting is far better than the original, which I know is damning with faint praise, but it has to be said. It doesn’t light the world on fire, but it’s good.

It’s new enemy Lisa Trevor! Her real face is under there somewhere…?

To quote me from my original game review:

“You play as either Chris Redfield or Jill Valentine, both stories have similar moments and have the same boss fights, but differ in the people you interact with (Rookie chemical expert Rebecca Chambers for Chris, and beardy veteran Barry Burton for Jill). The S.T.A.R.S. Bravo team, one of two special police forces in Raccoon City, have gone missing in the nearby forest after going to explore some grizzly murders. Chris, Jill, and the rest of the S.T.A.R.S. Alpha team go in search of them, but end up trapped in a creepy mansion instead. Their leader, the least trustworthy looking and sounding man in existence, Albert Wesker, as it turns out, lead the S.T.A.R.S. team to the mansion to conduct live tests of bio weapons created by the pharmaceutical company Umbrella.

It’s a fine story for a game that is more about the atmosphere and puzzle solving. Wesker’s betrayal and “death” are about the only interesting bit if you play as Chris. Jill at least has Barry, who is helping Wesker so his family doesn’t get killed.”

The only extra thing is Lisa Trevor, the daughter of the architect who built the mansion and was killed so its secrets and puzzles would never get out. She was kept and experimented on, the Umbrella scientists amazed that her body kept mutating the more viruses they pumped into her, eventually creating a near-unkillable monster they kept locked away…

I’m sure there’s a reason the snake is called Yawn, but its certainly not because that would be your reaction upon seeing it!

I was blown away by the REmake, visually mostly, but it was still fun to play as well! After never having been able to complete the original, I managed to beat this game with both lead characters. It still wasn’t easy, but those extra years of gaming had made it possible, I guess.

Hooray for the return of “clearly not going to betray you at all, nope, never” Wesker!

The REmake is still one of my favourite Resi games. It’s got amazing atmosphere and the general look and feel is just right. The HD remake of REmake, which I won’t bother reviewing on its own, is great too, as it gets rid of the tank controls and fills modern TVs very nicely. Either way, the original story need never be remade again, because they nailed it on the second try.