I remember looking forward to Resi 4, but after several recent releases failed to inspire (RE0 and the Outbreak series) I didn’t look into it much, and boy was I surprised! An entirely new control and view set up, a larger focus on action over horror, and a very weird new type of enemy that’s far more intelligent and capable than a zombie. Damn good fun it was too! Let’s take a look then, shall we?

END_OF_DOCUMENT_TOKEN_TO_BE_REPLACED

Hey, I know what you’re thinking “This is the second Resi film, why is he reviewing the prequel game?” Well, it’s simple: I’ve already reviewed Resident Evil 2 and its Remake, and if I review this now (given its close ties to the original REmake) and Code Veronica tomorrow, then Resident Evil 4, 5 and 6 will match up with the fourth, fifth and sixth movies, which will be … fitting, I guess (though technically not accurate!) So with all that out of the way: Resident Evil Zero, the prequel that could have been a great idea, but instead is pretty poor and messes up the timeline a bit. Ah well, let’s take a look anyway!

END_OF_DOCUMENT_TOKEN_TO_BE_REPLACED 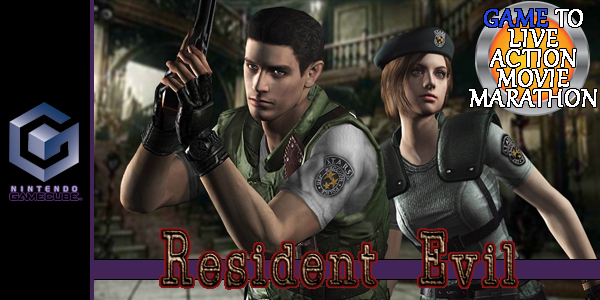 Thanks to already having reviewed the original Resident Evil, I’ll be tackling the far superior remake up against the film of the same name, which is vastly different in every way despite being released in the same year! The Resident Evil Remake still remains one of the most legitimately tense and atmospheric games I’ve ever played, as well as one of the more challenging for newcomers… Let’s take a look!

END_OF_DOCUMENT_TOKEN_TO_BE_REPLACED

While I’d like to review an actual old Game and Watch game, and I’m sure there’s probably some way of doing that, every other series that debuted in Melee has an easier-to-play game to represent them in this countdown, so rather than skip Melee, here we are! Super Smash Bros. Melee was when the series properly clicked with me and my friends. Countless hours playing against each other with two A.I.s, unlocking characters and trophies, or just playing Home Run Contest… Let’s have a look at it then!

END_OF_DOCUMENT_TOKEN_TO_BE_REPLACED

When my friend first asked me if I was buying Animal Crossing like he was, I honestly didn’t know anything about it. I looked it up and saw some screenshots and my initial thought was “Erm… no.”, but then I read about it, about the game’s randomly generated villagers and how it uses the internal clock to simulate what time of day, month and year it was. Sounded quite fun… then when I got it, the addiction began. While I sadly couldn’t take any screenshots of my actual Gamecube copy (that is now 90% overgrown grass anyway) let’s take a look at the game overall…