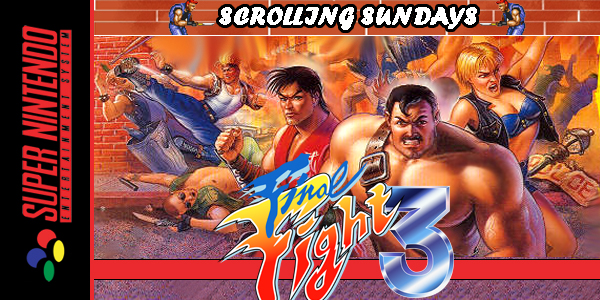 Time to complete the Final Fight trilogy, again a trilogy I had no idea existed back in the day. Thankfully unlike Final Fight 2, the third entry actually improves on the old system and even adds some Street Fighter systems into the mix, but is it better than the original?

Much like Final Fight 2, Final Fight 3 is a SNES exclusive and there was no Arcade game as a basis. It was released in Japan on December 22nd 1995, with the US release following in January 96 and the European release happening two months later. In the game you can select between a new record total of four characters, Guy, Haggar, Lucia and Dean, and it has a rather unique mode that allows a CPU-controlled second player.

Again, just like is immediate predecessor, Final Fight 3 has never been rereleased as part of any bundle or anything like that, just a release on the Wii and Wii U Virtual Consoles.

You’re all well and good lads, but can you breathe fire though?

While you often find yourself scrolling right and beating people up, weirdly enough, there are a few changes to the formula. You can still do a strike combo, grapple and strike, grapple and throw (Haggar piledrivers etc.) a jumping strike, and press jump and strike at the same time to do a health-damaging special move, but now you can also dash and do a dashing strike, do new moves via traditional fighting game inputs and most importantly at the bottom of the screen is a Super Meter! Yes, you can build up the Super Meter during gameplay and then actually pull off Super Moves, which then drain the meter instead of your health. It’s a really fun mix of traditional 2D fighters and 2D scrolling beat ‘em ups.

The other “innovation” is a branching paths system, where each stage has multiple ways out that lead to different stages, meaning your first few playthroughs will be quite different. Some of them even lead to different bosses! Depending on your character, the path you took and the difficulty setting, you’ll see different endings, leading to some actual replayability for those of us who actually like replaying these games…

The rest is the same, although each of the four characters has a weapon that grants them a special weapon combo exclusive to them, which is fun. As for genre clichés? Well it has a lift stage and some overweight (but not fire breathing) guys, questionably dressed female foes (and questionably dressed selectable character, to be fair!) and wrestler enemies (and again, selectable character), but is lacking in ninjas (beyond Guy, obviously…) and conveyor belts.

Dean is unaware the boss behind him has already killed Haggar…

Graphics are somewhere between the original and 2. It still has nice and chunky sprites and unlike 2 the backgrounds and enemy variety is a bit more pleasing to the eye, but I still feel the original is better (though again that might be because I played the Arcade version…)

Sound is fine. The soundeffects are pleasing to the ear and the soundtrack is more catchy than 2 but still not very memorable.

Dean is also sad that he can’t drive people in the floor with wrestling moves.

With the Mad Gear gone for good, you’d think peace would return to Metro City. Instead a new gang, called the “Skull Cross Gang” (a.k.a. literally a gang name I made up when I was 8) appears and among other things murders some people, including the family of a street fighter named Dean. Guy has returned to the city and met back up with Mayor Haggar and together the two hear of a riot started by the Skull Cross Gang in town, so they meet up with Special Crimes Unit member Lucia and the aforementioned Dean and the four of them beat the hell out of the entire gang, including their leader. Hooray!

Baseball guys with hockey masks and weird short WWI German grenade throwing guys are the opposite of genre clichés, I’ll give them that much!

As I said with Final Fight 2, these two Final Fight sequels weren’t discovered by me and friends until the early 2000s ROM boom. While we found FF2 to be dull and unimaginative, Final Fight 3 was good fun, especially the additions of Street Fighter moves and meters. I wish I had it back in the day, as I’m sure it would’ve got played a hell of a lot, the sheer amount of time me and friends spent on “Rival Turf” shows that would’ve be the case (look forward to that later in the run!) 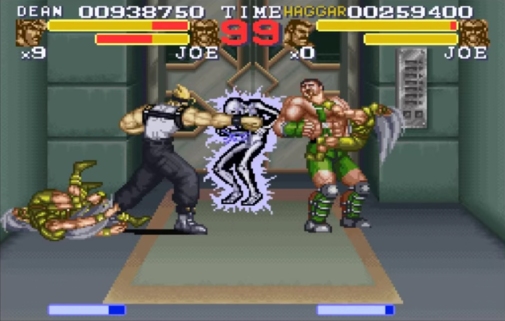 Final Fight 3 is a good example of the genre. Some move variety, new and unique weapon-specific moves and fighting game meters, good graphics and a branching storyline. While I think it’s missing that something special that makes it infinitely replayable like some other games, it’s a fun game to pop on for quick go from time to time.