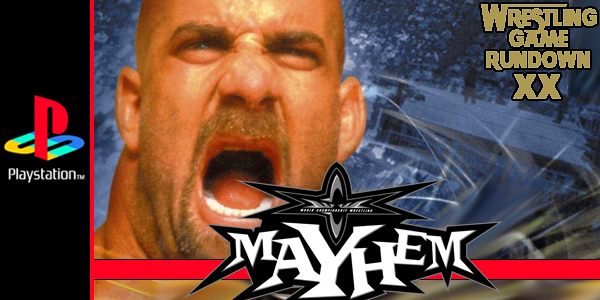 When I think of WCW games I either think of the great AKI engine games, the really bad Nitro/Thunder duo, or the bizarre game they end on (coming soon!) so WCW Mayhem always falls under the radar, despite being the last “serious” WCW game released, the only traditional wrestling game released by EA and the first wrestling game to have accessible backstage areas. How does this one-off play like? Should it be more fondly remembered? Let’s find out! 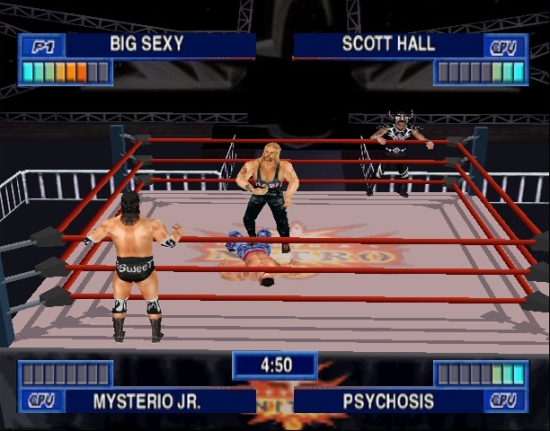 You know, after all these years, seeing an unmasked Rey Mysterio again is weird…

Plus the game debuts of Norman Smiley, Lash LeRoux and Sgt. Buddy Lee Parker (who will never appear in a game featuring a ring again…), and Bobby Eaton, Lizmark Jr., Bobby Blaze, Kenny Kaos and Bobby Duncam Jr. all make their one and only appearance, and with the exception of Eaton, this is to the surprise of nobody… 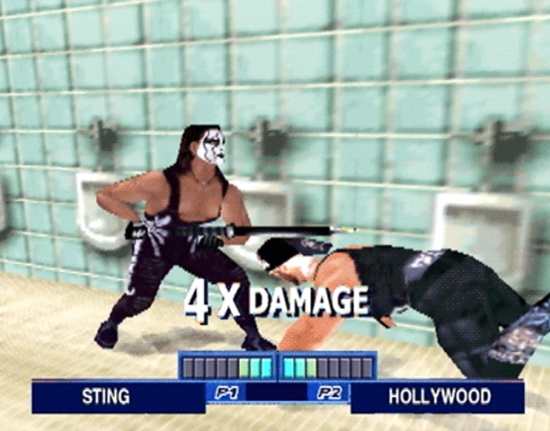 Everyone knows stuns rods do more damage in front of … paintings of urinals, surely? No need to even say it!

The gameplay is very similar to that of Nitro and Thunder, but with a spirit/momentum feature very similar to the AKI engine. So you can punch, kick (they’re actually two separate buttons!) grapple and do a few moves from a standing position. While in the grapple you can then do several moves by pressing directional buttons and face buttons. You can do a running strike, dive off the top, do ground moves, all the usual works as well. At the bottom of the screen (or underneath each health bar if you have more than two people in the match) are each character’s momentum, or spirit, if you will. The more moves you do, the higher it will go, and then when you hit max you can do your finisher. The reverse is also true, get beat down for a while and it drops, and the lower it drops the more susceptible to pins and submissions you are, in other words, the AKI Spirit engine, just visually different.

Now, this may sound like me complaining, but it isn’t! After Nitro and Thunder the wisest move EA could’ve made is to focus on the games within the same license that actually worked, rather than the ones that… well, didn’t. Sadly the engine isn’t as smooth and impactful as the actual AKI engine, it was just the meter system they borrowed. In fact the actual action is often clunky and full of weird clipping and generally poor collision detection, but it’s still weirdly enjoyable… for a while.

As mentioned in the opening paragraph, this game also saw the debut of backstage areas, not just for matches to take place in, but actually the ability to drag your opponent up the aisle and into the backstage during a regular match. Now, the backstage areas are literal flat-walled cubes with weapons on the floor, but still! I remember being extremely excited at the time. 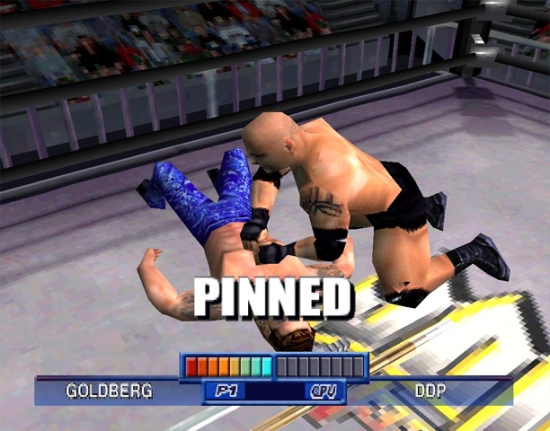 As for modes on offer, we have your regular exhibition matches, singles, tag, three and four way matches, some of which can also take place in a backstage area. It does lack variety though, as there are no cage matches, or any other speciality type beyond no DQ variants. The venues on offer are, for the first time, all three of WCW’s TV shows (Nitro, Thunder and Saturday Night) plus all 12 PPVs that were around at the time, which is impressive. Alongside Exhibition is the “Quest for the Best” mode, which is your basic career mode where you select a wrestler and rise up the rankings starting from the TV title through to US and then World titles.

A mode unique to Mayhem was the Pay-Per-View mode, which despite its name is actually different from the same mode featured in Attitude and some future games. Well, okay, it’s actually pretty similar in playing a card of matches in a row, but for this game you could put in “PPV Passwords” and unlock a card for an old PPV to play through. There were also three PPVs that WCW actually gave out Passwords on TV so you could play them on Mayhem before they took place in real life, which was a fun idea. You’ll also find an extremely bare-bones CAW mode on offer as well, but to be honest, even compared to the very first CAW mode from WWF Warzone its lacking, both in having so few items to use and in the fact you can only select existing movesets rather than create your own.

Overall it’s a fine base to start from, if they’d done a WCW Mayhem 2 rather than, ugh, Backstage Assault it might have been a winner… 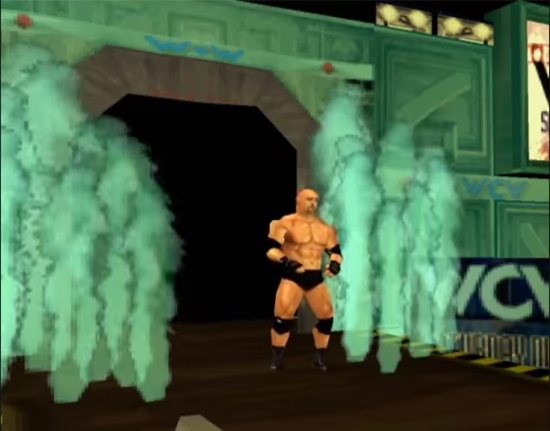 Goldberg makes a very green entrance in the only one of my screenshots to survive my move to a new computer… hooray!

At the time the graphics were extremely impressive. Big chunky sprites of different sizes, all with impressive and reasonably high-rez textures (for the PS1 at least). The backgrounds, especially entranceways and crowd, were lacking, as were the aforementioned “cube walls” when you go backstage, but still! The actual models were top class and are still impressive for a PS1 game.

Sound-wise is fine. Crowd noise is good, entrance music, for the most part, is all there, and the commentary isn’t too bad, with Tony Schiavone and Bobby Heenan actually playing off each other well in a few scripted moments, but does suffer from repeated “That Move!”  “That Move!”  “That Move!” issues, and some occasionally poor commentary name stitching. Still, as I always say, the first WWF PS2 game still has the worst commentary, so Mayhem can feel proud for having a half decent one on the PS1. 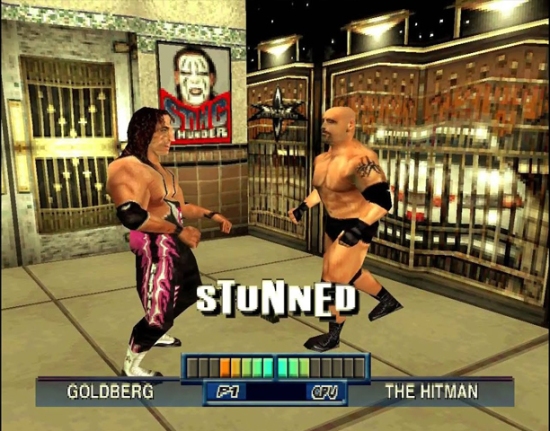 Looking at the “gate with a car behind it” texture, I’m quite stunned as well…

Back when I got the game I loved it, unlocking characters, the big chunky sprites and of course the backstage brawling. Sadly it didn’t take too long for WWF WrestleMania 2000 to fall on my lap at Christmas that year, and to be honest, reading about that game a month or two before I got it pretty much killed my interest in this game dead. It wasn’t bad though… 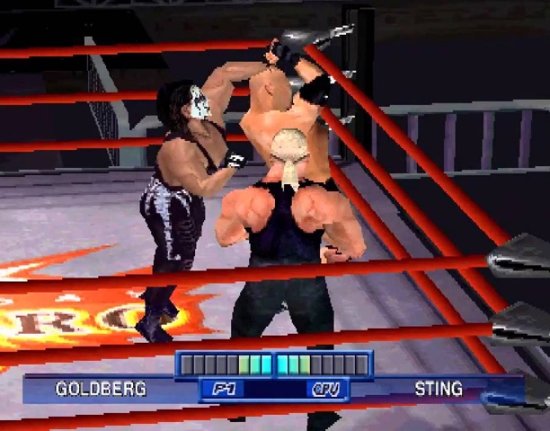 Lex Luger’s interfered, but whose side is he on?! Given we’re talking about 1999 WCW, probably a mysterious third party as a “swerve”… That probably turns out to be Vince Russo.

Playing it now in 2020 is an odd experience. There was some nostalgia when I saw the menus and the meters on the bottom of the screen, not to mention the … interesting looking backstage areas, and the controls are okay, it’s more the stiff animations and extremely poor collision detection that puts the game down a few notches. Obviously the visuals haven’t aged well either, but that can’t be helped, and if I’m honest they’re still not too bad. Overall it’s fun for a short burst, but it won’t hold your attention for long… which given that PS1 WCW games-wise this is coming after Nitro and Thunder is a hell of an improvement!