Yay! Another AKI game, and one with the WWF (at the time) license no less! I remember absolutely going crazy at the announcement that THQ and AKI had dropped the WCW license and were now working for their competition, and I still have a very vivid memory (which makes sense as I was 15 at the time, so it’s not like I was a child or anything) of seeing Chris Jericho was in this game, even though he’d only jumped ship recently, and just freaking out. So was the marriage of the AKI engine and WWF during the “just starting to get away from the super-immature attitude era and heading to the well written attitude era” a winner? … Do you even have to ask?! 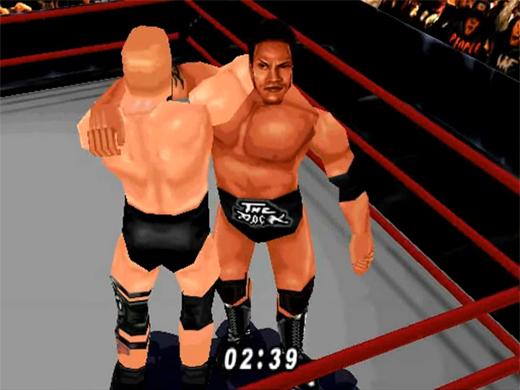 The Rock vs. Steve Austin?! I wonder if they ever faced in real life…

Plus the game debuts of Vince, Shane and Stephanie McMahon, Matt and Jeff Hardy, Test, Hardcore Holly, Albert, Mideon and Viscera (who are making their debuts despite having been reasonably successful in other gimmicks prior to these!), The Blue Meanie (his only appearance to date, though that’ll change by the end of this year…), Meat (later known as Shawn Stasiak… for one more game appearance), Scott Taylor (his only non-2 Hotty appearance), Debra, Terri Runnels, Tori, and Ivory, plus “stooge era” versions of Pat Patterson and Gerald Brisco, who have yet to appear in a game with models based on their “prime” years, sadly for them!

I don’t think Big Show would be struggling with pulling X-Pac down from the side of the cage. Hell, I’m pretty sure I wouldn’t!

I’m not going to go into great detail again, control-wise, but it is the same super-satisfying and real weighty feeling AKI engine, with light and strong grapples, ground grapples, light and hard strikes, ground strikes, top rope moves running strikes, dives to the outside, the lot. Finishers are still built up via a “Spirit Meter” which goes up the more you do and down the more you get hit (or hide outside the ring and get taunted, that’s the biggest Spirit drainer!) and once you taunt while your Spirit Meter is flashing you go into “Special” mode and can hit your finishing move by flicking the analogue stick while grappling (or wherever your finisher is done from). You can also steal your opponent’s taunts and finishers as well. As per usual the feedback and impact from the moves and strikes are great and make every match a joy.

The only major difference between this and WCW/n.W.o Revenge is the lack of the strike combo system and sadly for the US and PAL versions: blood. You still hear a satisfying thwack and the affected person still falls and holds his hand to his head and looks at the palm of his hand as the crowd goes “wooahhh!”, but there’s no blood. I hear early copies of the US version had it, but I can only speak for the newly-released copy I got at Christmas 99, and that never had blood…

There were a lot of new modes in WM2000 compared to Revenge. For the start off there is a proper career mode, with a calendar, titles and feuds… though it often just comes off as a long string of matches with very little interesting happening, plus each title is defended on each PPV, which means if you have multiple titles you have multiple matches per show. I only really went through it once to unlock all the hidden characters as the AKI games were mostly four-way or Rumble matches with friends, so… Yeah. There is also a PPV mode where you can create cards with titles (including titles you’ve made yourself!) and multiple match types and then play through them, which was handy for this sad teen who still wrote down cards for his made up promotion in notepads…

Speaking of match types, there are some new ones including a Cage Match, Triple Threats and Fatal Four Ways (though the latter could be done before by selecting a battle royal with only three or four people in it…), plus a First Blood option that was in hindsight rubbing it in a bit. You still could edit the rules to all the match types apart from the Rumble (that comes next time!) and grab weapons from the audience and use them so long as DQ was off, with some wresters having specific weapons, like Bossman having his nightstick, or Al Snow having Head (way-hey, etc.). The annoying cartoon drawing of a referee was also back, and also turned off immediately by me again… Lastly there is a full Create-a-Wrestler mode, with each CAW having the four attire slots like the main playable cast, plus you can also completely edit the alternate slots (and front slot if you want!) of the existing characters, which means the initial limited number of roster spots becomes more flexible, so long as you don’t mind shared movesets.

The ultimate dream match… is not Bradshaw vs. Dude Love.

The graphics are pretty much the same as Revenge, nice smooth and chunky models with photos of the stars painted onto the faces. The arenas look fine too, and the menus are functional enough. The game is all about the AKI engine anyway, so…

Sound is good, nice if-not-repetitive music, crowd is fine if-not-a-little-too-digitised and all the entrance music is here… for 40 seconds and really badly compressed (cartridge space! Woo!) Okay, so maybe the sound isn’t the game’s strong suit, but the sound effects still add to the satisfying and physical gameplay, and again, that’s the main thing… 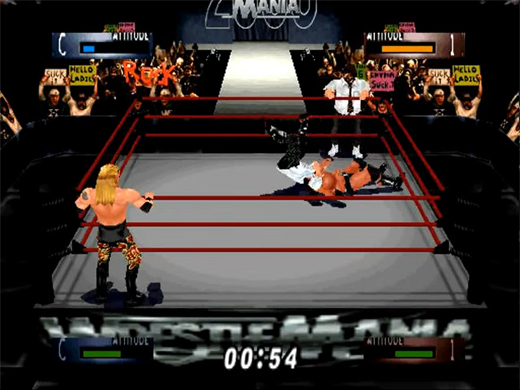 I shall call this screenshot: “Tag Team Match”.

What can I say? It was WCW/n.W.o Revenge but with the WWF license just as they were about to catch fire and have the best year and a half in their history. It was mine and my friends’ go-to wrestling game until No Mercy at Christmas 2000 (with a little bit of a wait due to a faulty cartridge, I’ll get to that when I reach No Mercy…), because frankly the AKI engine can’t be beat for pure wrestling game fun. 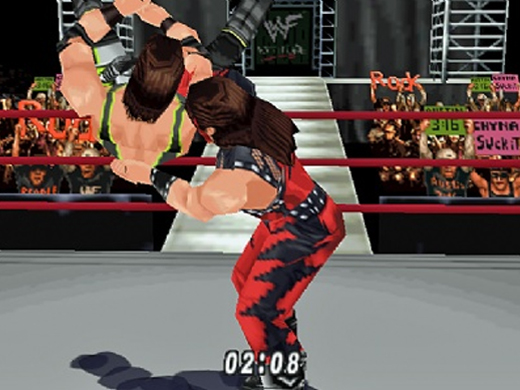 It’s funny playing WrestleMania 2000. It’s still great because the AKI engine is great, but it lacks the rare good WCW game-ness of Revenge, and lacks the extra polish of No Mercy, so it kind of falls in between. As a game it’s still great, but I have to mark it down a little due to not quite feeling as great as it did once before…