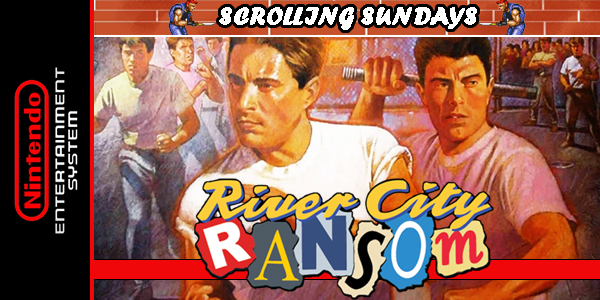 Time to finally kick of “Scrolling Sundays”! Oddly, the first two games in the weekly feature are ones I didn’t play back in the day, but since I have free access to them via Nintendo Online, I thought “why not?”. River City Ransom is a game I’ve been meaning to play for many years, so it was nice to finally sit down and play it a bunch. What’s this extremely early example of the genre like? Let’s find out! 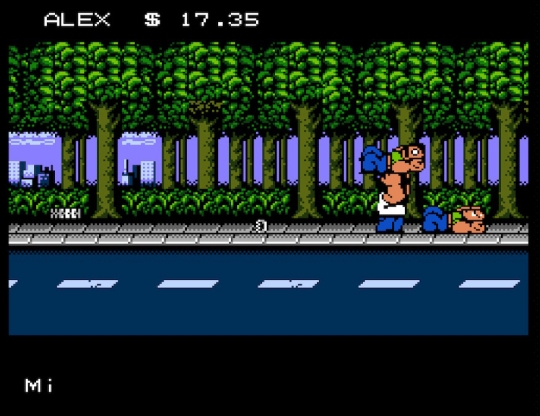 Damn, hitting somebody WITH somebody. That’s some beating!

This game has had quite a history of renaming. Firstly, it was released in Japan as “Downtown Nekketsu Story” on April 25th 1989, then renamed and de-Japan’d before being released in the US as “River City Ransom” in January 1990, then finally released in Europe in 1992 as “Street Gangs”. It was later ported to the “Sharp X68000”, whatever that is (beyond a home computer, obviously), the Super CD-ROM (also never heard of it, but again presumably a Japan only PC of some kind) and oddly the an updated port on Game Boy Advance in March and May 2004 for Japan and the US respectively. It has since been available digitally to purchase on the Wii or Wii U store, and is available to anyone with a Nintendo Online account and a Switch (like myself!).

Beyond renaming the title and making the location, gang and character names more English friendly, River City Ransom / Street Gangs also changed the sprites themselves to replace the Japanese school uniforms with the generic jeans and T-Shirts. 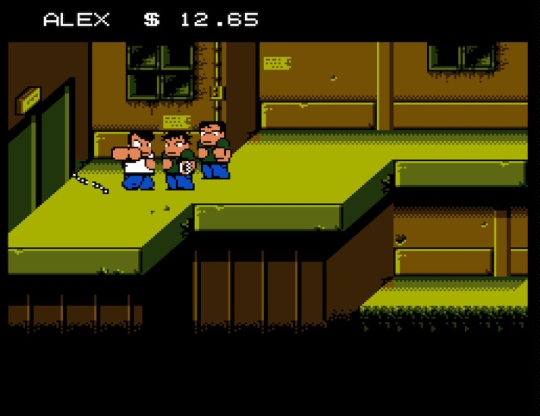 At its heart River City Ransom is a Scrolling Beat ‘Em Up (hence being apart of this feature!) but unlike most of the games that’ll be featured on this rundown, it has a lot more going for it. Despite being a NES game released in 1989, it features an almost open world feature, giving you the freedom to walk to parks, roadsides and towns and even enter loads of shops to buy things. You get money by beating up your foes, and the stuff you buy can increase your stats, which is another relatively unique idea for the genre. Certain magazines will give you new moves, while other items you can keep in your inventory and use later.

The actual Beat ‘Em Up part is good too! The punches and kicks feel solid, you can do a jumping kick or a running punch, pick up weapons like brass knuckles, pipes and the old Double Dragon trash cans, and you can even pick up your enemies and throw them the same way you can items. It’s good fun. It’s two player as well, which is always welcome in this genre, and not a guarantee as I found out with my NES Double Dragon Review…

As for Scrolling Beat ‘Em Up clichés? Well, it has pits you can get punched down, but that’s about it. No lifts, conveyor belts, fire-breathing fat guys or scantily clad whip women (though the last two would be a tad out of place in a school setting…) 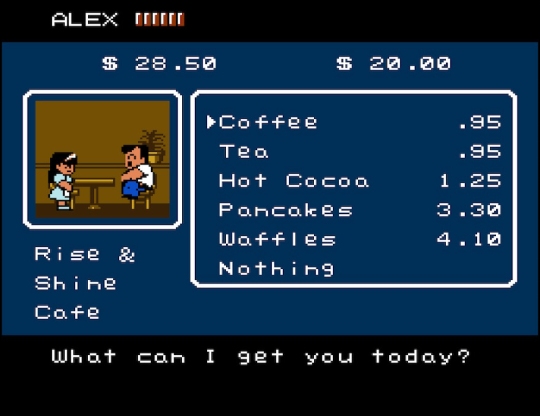 You won’t be seeing a screen like this very often in this review series!

The graphics are simple, but have a real charm to them, intentionally cartoonish with some fun facial reactions. The backgrounds are impressive enough for the era as well.

Background music is catchy, but obviously repetitive at times, but the sound effects are nice and satisfying to hear when punching some random thug / student in the face… Hooray! 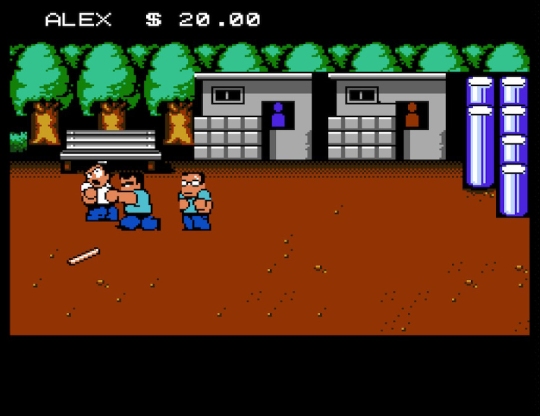 I believe “Oof!” is the correct subtitle for this picture.

Alex and Ryan must cross River City in order to reach River City High and rescue Ryan’s girlfriend Cyndi from “Slick”, the head of the roughest gang in the City… Well, I assume roughest student gang, anyway. Along the way the duo fight several other student gangs, all of whom helpfully wear different coloured t-shirts. That’s it, but if you’re looking for complex storylines, you’re in the wrong genre! 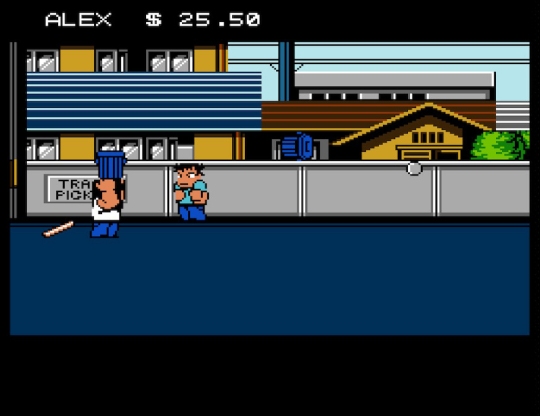 Picking up entire trash cans, complete with lid? How very Double Dragon of you!

I really enjoyed my time with River City Ransom, and I’m sure I’ll be going back to it again soon. This marathon is nearly entirely games I’ve played growing up, but this is a rather fun way to kick it off, even if it isn’t in the “spirit” of the weekly marathon. The mix of RPG elements and no “stages” in favour of an almost modern open world make this a joy. If you have a Nintendo Online account I recommend giving it a go yourself!