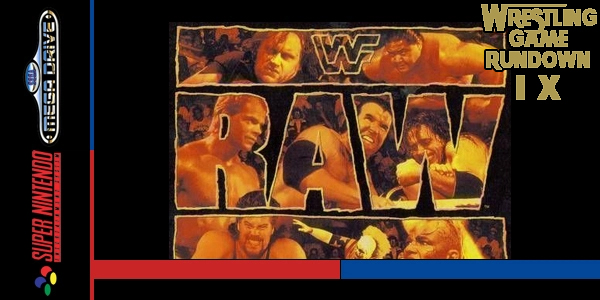 The Wrestling Rundown reaches the end of the Acclaim 16-bit engine games: WWF RAW. Once again I had it on the Mega Drive then later re-brought it for the SNES when I inherited my brothers SNES collection after I had sold off my MD. RAW is the culmination of the three games, with some great new additions like unique movesets and tornado tag team matches being in alongside the personally played-to-death Royal Rumble mode. So let’s have a look then! 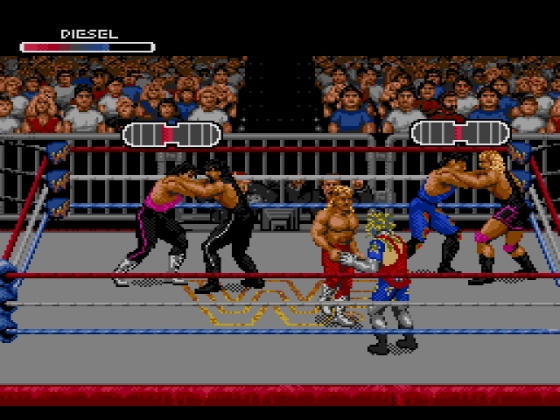 Look at those tug-of-war bars! Not intrusive at all…

WWF RAW was released on the SNES, Mega Drive, Game Boy and Game Gear in late 1994 in both the US and Europe, oddly enough! A Sega 32X port was also released in January 95 for the five people who had one.

Unlike the last two games, the SNES and MD versions of the game had the same roster, though the Game Gear and 32X versions had some bonus ones! The default roster for the SNES/MD game features Bret Hart, The Undertaker, Shawn Michaels, Yokozuna, Lex Luger, Razor Ramon, and Bam Bam Bigelow, plus the wrestling game debuts of Diesel, 1-2-3 Kid, Owen Hart, Doink the Clown and, oddly, Luna Vachon, the only female wrestler in the game!

The 32X version had the same roster but added Kwang to it, making his one and only game appearance (as that character, Savio Vega would later reappear… 20 odd years later!) where as the Game Gear version dropped Owen Hart, 1-2-3 Kid, Doink the Clown and Luna Vachon, but added Crush and Macho Man Randy Savage, making his last WWF/E game appearance for nearly a decade and a half. The Game Boy version, however, just dropped Owen Hart, 1-2-3 Kid, Bam Bam Bigelow and Luna Vachon without gaining anyone extra. 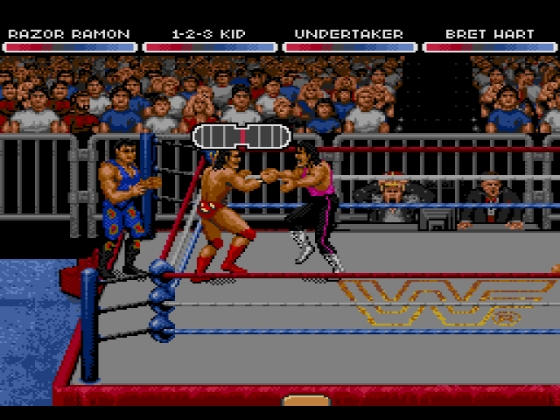 Wow, Jerry Lawler is freaking out at the idea of a grapple taking place!

Much like the other Acclaim 16-bit games, this has the tug-of-war system, with a meter appearing above you when you grapple leading to some button mashing deciding who gets to do a move. It’s worth noting that this time each wrestler has different moves they do, so not just suplexes and atomic drops this time! There are also punches, kicks, top rope moves, running moves and illegal moves, as well as weapons to use outside the ring, like a steel chair and… Doink’s metal bucket. There are also finishers, and “Mega Moves”, which is a sign of the forthcoming insanity that is WrestleMania: The Arcade Game, as they’re super over-the-top moves where people get thrown up to the rafters or uppercutted out of the ring. The Mega Moves are done via a button combination, rather than just grappling at a certain position when your opponent is low on stamina like regular finishers.

As for modes, there are 1 on 1 and 2 on 2, both of which have regular One Fall, Brawl (no referee, therefore weapons are legal as well as the illegal moves, the first one to run out of stamina loses, rather than being pinned) and Tournament, which is the old pick your wrestler/s and run through a gauntlet of other stars until you win the big prize. The Survivor Series bout returns, which again plays as a regular tag team match but with 4 v 4, a button press switching who is on the apron out of your three partners, which ever team is whittled down to none loses. The Royal Rumble returns untouched from WWF Royal Rumble, although some Mega Moves can result in instant elimination. Happy to report the post-match stats screens return, sadly for the last time…

New to RAW are the Bedlam match, which is just a Tornado Tag Team match with a more catchy name (it’s just a tag match with all four people in the ring rather than having to tag out) and a “RAW Endurance Match”, which is just a longer survivor series match mixed with Bedlam, but you can pick just one wrestler against an endless onslaught of up to six others, or make it more evenly spread out. 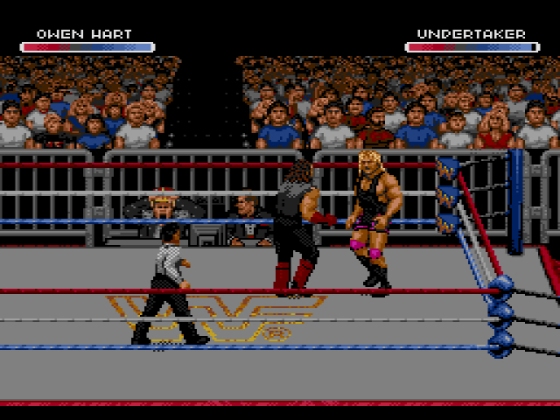 The Undertaker, with his classic red gloves and boots attire he… never wore ever. (Must have been a graphics limitation thing…)

Graphics are much the same as Rumble, but a little clearer, a bit more detailed. The backgrounds are a bit brighter and more detailed as well, but overall there isn’t a massive difference between this and its predecessor.

Music is also much the same. Fun MIDI versions of wrestlers theme music playing at the character select screen, catchy MIDI version of the RAW theme for an intro, but otherwise mild crowd noise and lots of “Argh!” and “Oof”, as well as a “Puh!” sound when ever you punch the ref, which is always funny. 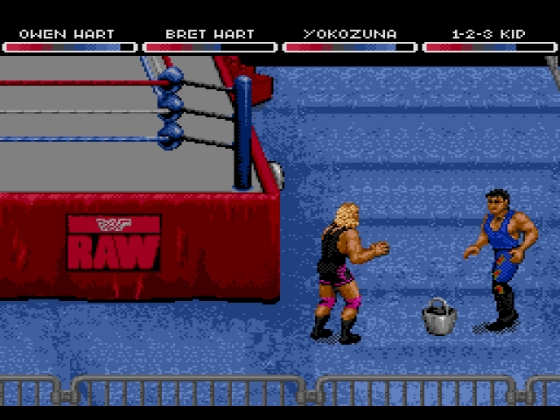 An epic showdown for control of the all important bucket!

I played this game to DEATH. After this came the two Acclaim Mortal Kombat rip-offs and some disappointingly bare-bones early PS1 titles from other companies (look forward to all of that coming soon!), so this was the pinnacle for some time. Not to mention from Jan 94 to towards the end of 96 is when I was literally WWF mad, I barely watched anything else, so a game featuring Bret Hart, Owen Hart, Diesel, Razor Ramon, Shawn Michaels and The Undertaker, plus a Royal Rumble mode… Yeah, I was hooked, and wouldn’t let go… 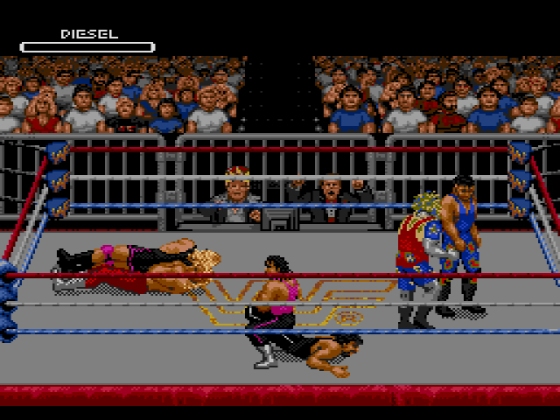 What are Michaels and Owen doing, exactly?

The engine is still pretty poor after a while, and obviously dated, though at least some moveset variety and being set in my most loved period helps a lot. There is a good selection of modes too, so although I wouldn’t recommend picking this up now, I will give it a round of applause for ending the 16-bit era on a high note.